The Trump administration is expected to announce Friday a proposed rule to cut family planning funding from abortion providers such as Planned Parenthood that promote abortion and refer women for the procedure as a method of family planning.

The new regulations would prevent abortion vendors from operating a family planning program in facilities geared toward ending life and would make abortion counseling optional – not required – while they would not allow for abortion referral.

According to the executive action, Planned Parenthood and other abortion vendors would lose the funding they have been receiving under Title X, a program that provides about $260 million annually in federal funding for birth control and other services that are categorized as “family planning” – if they continue to perform abortions and refer women for abortion as a means of family planning. Those funds are to be redirected to other facilities that provide more comprehensive healthcare services.

“The proposal would require a bright line of physical as well as financial separation between Title X programs and any program (or facility) where abortion is performed, supported, or referred for as a method of family planning,” a Trump administration official reportedly told the Weekly Standard in advance of the announcement.

The administration’s executive action is in keeping with a 1988 Reagan rule that ended past practices of allowing Title X to fund programs that existed at the same location as abortion clinics, referred women for abortions, and that lobbied for abortion rights – all as long as taxpayer monies were not directly funding abortions.

When the Reagan administration clamped down on the fuzzy line between providing taxpayer funding for birth control and promoting abortion, the rule was challenged in court. Ultimately, the Supreme Court upheld the regulation, 5-4, in Rust v. Sullivan. By the time the case was decided, however, the Clinton administration had moved into D.C. and rescinded the Reagan rule. The George W. Bush administration never launched an effort to reinstate it.

“Unlike the Reagan regulation, the proposal will not prohibit counseling for clients about abortion, but neither will it include the current, potentially illegal mandate that projects must counsel and refer for abortion,” a Trump administration told the Weekly Standard, adding:

This proposal does not necessarily defund Planned Parenthood, as long as they’re willing to disentangle taxpayer funds from abortion as a method of family planning, which is required by the Title X law. Any grantees that perform, support, or refer for abortion have a choice – disentangle themselves from abortion or fund their activities with privately raised funds.

Title X, however, is only a minor portion of Planned Parenthood’s taxpayer funding. Medicaid funding is the organization’s primary funding stream and can only be eliminated through legislation passed by Congress and signed into law by the president.

Planned Parenthood is calling the proposed regulation a “domestic gag rule” because, they claim, it ‘gags’ doctors by banning them from receiving Title X health care funding if they even talk about abortion or abortion-related services”: 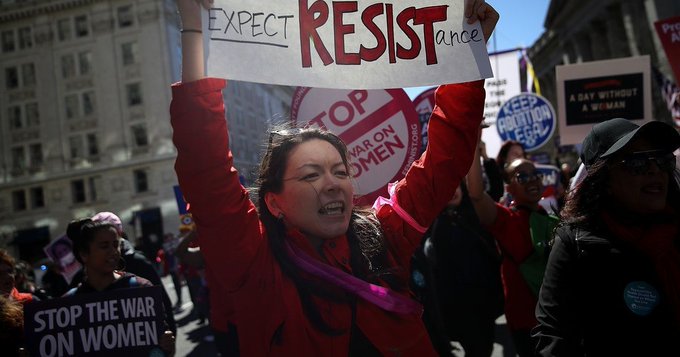 The Trump-Pence administration wants to implement a dangerous gag rule that threatens your access to reproductive health care — and these lawmakers are not having ANY of it: https://ppact.io/2INY6kC  #NoGagRule

Trump made four promises to the pro-life base of his party while campaigning in 2016, including that he would defund Planned Parenthood if the organization continued to perform abortions. In response, the abortion lobby has only doubled down further in its narrative that abortion is “health care.”

National pro-life organizations have praised Trump for being true to his promises. On Tuesday, the president will keynote the annual Susan B. Anthony List Campaign for Life gala. At the annual March for Life event in January, Trump also became the first sitting President of the United States to address the March live via satellite from the White House.

“It’s a shame that the federal Title X family planning program has been co-mingled with abortion ever since President Bill Clinton issued regulations not only removing the wall of separation President Reagan issued, but even requiring groups to refer for abortion,” said Tony Perkins, president of Family Research Council. “The result is that Planned Parenthood — an organization that’s been under criminal investigation for selling baby body parts — gets roughly $60 million per year through what has become a slush fund for the abortion giant.”

“Planned Parenthood and other abortion centers will now have to choose between dropping their abortion services from any location that gets Title X dollars and moving those abortion operations offsite,” he added.

Republicans in Congress have been vehemently criticized by their constituents for failing to eliminate Planned Parenthood’s Medicaid funding, though they vowed they would do so once they had control of both chambers of Congress and the White House.

In the Senate, where the GOP holds a very slim majority, two liberal Republican senators – Susan Collins of Maine and Lisa Murkowski of Alaska – have consistently voted in favor of abortion rights and against defunding Planned Parenthood.

Measures to defund Planned Parenthood have been attached to larger pieces of legislation – such as Obamacare repeal bills that failed to actually repeal the healthcare boondoggle. More recently, Republicans failed to include Planned Parenthood defunding language in their tax reform reconciliation, knowing Collins and Murkowski would likely not approve the measure in the Senate. In general, many Republicans in the Senate have been much more interested in “bipartisanship” than abiding by the wishes of the conservative base of their party.

Democrats, on the other hand, have made clear on many occasions they will not agree to any legislation that defunds Planned Parenthood, and Democrat Doug Jones’s win of a Senate seat in Alabama means most U.S. senators are now pro-abortion, as the Weekly Standard observed.

In response to the Trump administration’s announcement, Students for Life of America President Kristan Hawkins said the new policy would prevent abortion vendors from operating a family planning program in facilities geared toward ending life.

“These changes are long overdue as abortion is not health care or birth control and many women want natural health care choices rather than hormone-induced changes,” said Hawkins in a statement sent to Breitbart News. “You can really see how insidiously entangled the abortion industry is in our government-run healthcare programs when abortion allies in Congress get apoplectic because family planning programs don’t include a sales pitch to end the lives of family members.”

Planned Parenthood’s 2016-2017 annual report shows the group continues to perform more than 320,000 abortions per year while offering no mammograms and minimal prenatal services to pregnant women.

The abortion provider boosted its profits by $21 million – 27 percent – from last year as the group also took in nearly $544 million in taxpayer funding.

In December, the U.S. Department of Justice launched a formal investigation into Planned Parenthood for its alleged sale of the body parts of babies aborted in its clinics for a profit.

“Does anyone believe that the 266 Planned Parenthood clinics that sell abortions as well as birth control don’t try to increase their profits by also pushing for the end of preborn life when women pass through their doors?” asked Hawkins. “The Trump Administration has every right to require that Title X programs focus on health care, not abortion, and to keep such programs aimed at helping women make a plan for a family outside of the facilities designed to making sure women don’t have a family at all.”